Over the last few months, I’ve watched the Lord of the Rings Trilogy (extended edition!) with some of my friends on our team here.  In the last movie, Return of the King, I found tears in my eyes…during the battle scenes!  Not your typical teary-eyed moment, right?  But I’ve noted that both in this and some other movies with epic clashes of good and evil, something deep in my soul is stirred up.  Often it leaves me teary as I watch the battle unfold.

Why is this? Why am I crying when Mordor comes to battle the realm of man, dwarf, elf, hobbits, and all things not evil? Or when Peter and Lucy and Susan prepare to face the White Witch’s evil forces, why am I on the edge of my seat every time, inspired, emotional? It’s just a movie right?  Maybe yes.  But, I think it’s also a moving depiction of the reality of life as a believer.  I think there’s something in all of us, Christ-follower or not, that stirs up to fight for those we love and for what we hold dear.  Some place in each of us longs for this epic life, be it battle, adventure, discovery, or some other epic tale, our hearts stir up as we read and watch mighty stories unfold.

As I watched the battle for Middle Earth unfold onscreen, I found myself cheering for the men and the hobbits, the side of the good guys, urging them on.  My heart was reminded of truth: though evil may seem to prevail, may seem impossible to surmount and certain to defeat us, it will flee and run in the face of good men who stand and fight for a cause beyond themselves. It’s not about self or survival in this moment, it’s about laying down your own life for the sake of many others and for the battle against evil.  It’s about fighting for the preservation of the kingdom and of lives against the darkness that wants to destroy all light.  It’s about the ultimate story of good vs. evil.

Ultimately, all evil will be destroyed.  King Jesus has already conquered sin and death, yet for a season he allows the “prince of the air” to have some leeway in this world…because He knows it will ultimately bring MORE glory.  Sometimes – many times – it’s hard to see and understand that in the midst of battling the darkness.  It’s not often easy to see how He will turn our weeping and mourning into dancing and singing.  But I know He will, for He is faithful and good, true to His word and His people.  And you know what else? We know the end of the story.  It’s right there in Revelation, and it’s hinted at all over the place throughout the Bible. The King will return and he WILL have the victory.  He is raising up His people now and He will be faithful to His own and lead them on to victory and eternity.

So for now, we’re called to fight the good fight.  To arm ourselves with the whole armor of God and not back down. It is worth it. Every bit of the battle is worth it. Even unto death.  For, as Gandalf says to one of the hobbits, “the journey doesn't end here. Death is just another path, one that we all must take. The grey rain-curtain of this world rolls back, and all turns to silver glass, and then you see it….White shores, and beyond, a far green country under a swift sunrise.”  There’s more than what we see friends. And even should we battle unto death (for we all will one day), it is not the end.  There’s so much more beyond the shores. 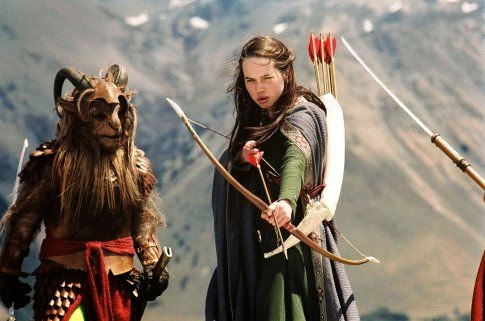 In the midst of a heavy season, where we are seeing some major spiritual warfare here in this community, this movie and these truths bring great comfort to me.  These pictures of spiritual reality seem even more poignant. Some days the darkness is almost tangible here.  It presses hard against the light that Christ is growing.  My heart and mind weigh heavy some days and weeks from this.  We have been doing battle, and it is continuing. Thankfully, the Lord has given me these beautiful depictions of truth recently.  He’s reminded me to hold on, to stand firm, and to fight.  For, oh, dear ones, it is worth it.  Through the battle, the respite, and every place between here and eternity’s shore, holding onto and fighting for the Word of Life is worthy of my everything.

The cry of Aragorn, the returning king, in the face of the last battle, one that seems sure to be an incredible loss, keeps bringing me great comfort:
Sons of Gondor! Of Rohan! My brothers! I see in your eyes the same fear that would take the heart of me! A day may come when the courage of men fails, when we forsake our friends and break all bonds of fellowship. But it is not this day. An hour of wolves and shattered shields when the age of Men comes crashing down! But it is not this day! This day we fight! By all that you hold dear on this good Earth, I bid you stand!

From this warrior, may each of you be strengthened and encouraged as you stand to fight, whatever your battle is. Maybe go watch one of these epics and let the beautiful, poignant truth speak deeply.  What we see here and now is not the end.  There is indeed an epic battle being waged, and I am blown away that I am on the side of the Victorious One, by His grace alone.  The battle is real, and it may wear you out, but you will not be defeated friends, if you are following the One who leads us. Carry on.

Hi Sarah, you don't know me, but I know Lauren & Derek. I just read your beautifully written piece " I bid you stand", what an awesome encouragement for the Church at such a time as this! I hope it's okay for me to post your piece on my FB page to encourage others. I'm praying for the team. Would you please give Lauren a big hug for me!

Thank you so much! You are absolutely welcome to share this. I'll make sure and give a huge hug to Lauren for you!

Sarah
I am a follower of Jesus and love loving my Jesus! He has led me to Uganda and He is teaching me, delighting my heart and soul, taking me to the end of myself, and blowing me away. It is a delight and a wild ride. These are some of my stories, thoughts, and ponderings

some baby loves...check their AMAZING fam out!!!